ALL IS FORGOTTEN, NOTHING IS LOST 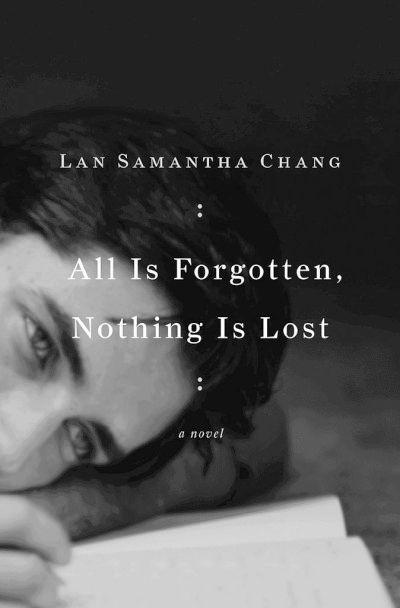 I write about Lan Samantha Chang’s newest novel All Is Forgotten, Nothing is Lost with a conflicted excitement. The novel candidly conveys the experience of making art in ways enlightening and unsettling.

Art creates strange allies. Chang makes that fact abundantly clear when she introduces Roman and Bernard, two grad school students united by being poets and the fact that they don’t smoke. Roman quietly smolders with ambition, irreverence and cocksureness that mask his insecurity as a writer. He dubs his classmates “acolytes” and refuses to workshop his poetry with them until the final week of the semester. Bernard revels in the romance of the poetic life. He takes pride in poverty long after grad school and corresponds via letter with poets much more established and/or successful than he, while dedicating his life to one long poem, which bears the same name as the novel. Both men are students of Miranda, their college’s celebrated poet in residence whose teaching style is eccentric and often counterintuitive. Roman and Bernard find friendship in Lucy, a student who speaks up for Roman’s poetry when the acolytes dub his work as “aggressive toward the reader.”

Chang gives us four montaged chapters of the characters’ lives. We see Roman cope with being married with writer’s block despite (or because of) his first collection of poetry receiving accolades. We watch Bernard’s life as an art mystic devolve into obvious freeloading. Miranda gets hurt by one of the only students she opens up to. And Lucy enters a silent struggle between motherhood and art that lasts for years. Though Chang only gives us Roman’s thoughts, the inner plights of each character make themselves known. The lesson: Life experience is a finite resource. Nothing is gained without a price. Frequently, the costs are heartbreaking and haunting.

Chang doesn’t reveal the work of these writers. Instead, she allows us to admire her prose, which is delivered in a deceptively uncomplicated manner. Her language is precise and her dialogue layered, often referencing that which isn’t being said but still communicated between characters. She inhabits the words of each character distinctly while allowing us revel in the varying ways they respond to one another’s work. Any imaginative, well-read reader will be stirred by Roman’s reaction to discovering Bernard’s long poem decades after its inception.

Little more should be said of All is Forgotten, Nothing is Lost. Revelations on life, love and art are hastily revealed in this short novel packed with several lives. Chang, who wrote the book in two semesters of academic leave, brings the narrative to bear with a prophetic urgency. It’s a fine read for anyone tortured by life-long aspirations, but it will hold a special place on the shelf of any artist.